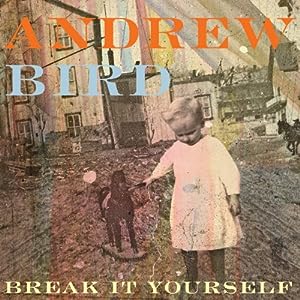 In an effort to cover more new releases in a more timely manner, I came up with a new feature. I'm calling it First Impressions. The idea is to choose one album a week and write a stream-of-consciousness review during my first (and only, for review purposes) listen. The pick will come from your, our reader's, votes. Think of it like live-blogging meets Faulkner meets Greil Marcus meets American Idol…only it's probably nothing like those things at all.

Last week, we unveiled a new feature called First Impressions, which is a single-listen, stream of consciousness style review of a new release chosen from reader votes. I kicked it off with Bruce Springsteen's latest album, Wrecking Ball. But the truth is, the vote was a tie between the Boss and the newest from Andrew Bird. So before we get to this week's release, I gave a spin to Mr. Bird's Break It Yourself for all those that voted for him. And I will remind you once again that what follows is an unaltered transcription of my in-the-moment thoughts on my first and only listen to the album.

Andrew Bird is quite an incredible musician and performer. I'm not intimately familiar with his discography, but I have seen him live and do enjoy his music (here's a TWD write up of a song he did with the Preservation Hall Jazz Band). Break It Yourself is Andrew's seventh solo album, but he has performed with the Bowl of Fire and many other acts. Here are my in the moment thoughts, which I recorded as I streamed the album via Spotify, which you can do here.

It's a little moody of a beginning: plinks, low voices. I'm almost expecting something to "jump out" with those crescendos. Nevermind, here's a nice melody over guitar as we get into the song. Is he saying bees?! Or beads?! (Read that bit in your best Gob voice). I like this plinking figure just before the two minute mark. The music doesn't quite sound looped. Is it? When I saw him live, he was good at that. This is a really pleasant passage. He's also a good singer. "We keep breeding desperation." Getting violin now, I wonder how many instruments I've heard so far. Not exactly sure what's going on for the whole, but the track has nice parts. It's almost like vignettes. "Peculiar incantation," seems a good brief description for his songs. The rhythm section is nice here, not sure I really noticed until this end part.

Is that ukulele? I like it. A little violin. Oh, this isn't much of a song. It's over. Was that breathing at the end?

For the ethnic implications of the name, this feels folky to me. I picture more of a farm than an island. Is that violin or something like a theremin shrieking? Definitely enjoying his voice, he just feels like a singer in a different class than most others. He's such a pro all around, like a musician's musician. I'm probably missing a lot of his lyrics, but I like "Mistaking clouds for mountains." Now the song might be shifting, a little after 2:00. Oh, the whistling. He's amazing at this. Definitely getting a reggae / calypso vibe now, it's working! Little "3 – 4" into a violin part and another tonal shift almost. Now I hear it as a fusion of the two parts, that's skill.

It's interesting that it feels a little hard to distinguish some of these songs already, even if they don't actually sound alike. Ok, there's a change with the vocals. A new steady pace. I like that "Yeah, I gave it away" aside. Hmm, love as a commodity, that's interesting. Also words like "inflation," "charts and graphs," and "currency." He's good at singing with single note patterns. I can't help thinking of this almost as the Gallant to the Red Hot Chili Pepper's Goofus when it comes to comparing their song of the same name.

This is feeling a little more rock. More guitar going. Nice opening lyrics, seems kind of cutting. Sort of reminds a little of "Heretics." No one can break your heart, so you break it yourself" – cool line and there's the album title. Second big whistling part now. "Give yourself a hand," at this tempo just doesn't feel sincere. Hmm, interesting play on song title with what I thought was "re-ionize" becoming repeated into "eyeoneye." "Realize you could use some help," sort of confirms that it was not true praise earlier. Accelerates to the end, doing a gallop. I like the energy.

This album is more about attention. Longer songs. Not feeling like the best "one time/first time" review candidate. How much am I even gleaning? Anyways, there's sort of an opening passage to this song, like track 1. Maybe the most simple song so far, as this verse goes at least. Elegant violin. I could probably listen to Andrew Bird just whistle a whole album. Interesting details of casting director, editor, lazy projector. I like this metaphor for memory a lot, really neat. A sort of Spotless Mind vibe to the song? This is relaxed in a good way. Assured. I like this outro, a little rise before settling down.

Interesting title. The song is reminding me a little of "Imitosis." Plucks and plinks. Some sung "ba-ba's," and yet he's such a good writer. "Used to" getting used a lot here. Grateful to simply be alive – why does it always seem to take so much to get us to change our outlook on life? Lots of neat effects here. He's good at mixing these toy chest collages and classical composition. His songs are like puzzles. Not sure who other vocalist(s) is (are). There is a confidence to the sound, as if embodying this changed perspective. It's a strut.

8. Things Behind the Barn

Another short instrumental it looks like. What's the choice criteria to do this, versus just making a longer song with an introduction? Plaintive violin and then some nice figures & scales.

I think this is named after a ship…ok, he mentioned one sinking, confirms it. This might have the most "full" drumming, not that it's too prominent. It's downbeat, but I'm enjoying the groove of the song. Female vocalist taking over, she has a nice voice. "Go ahead say something dumb, boy. There's no shame" – I like that a lot. Seems like it would be hard for Andrew Bird to follow through with that. A pretty lovely argument for stupidity. Not that it is, but definitely a good line for the overly analytical like me to remember.

From history to Greek mythology. I like the percussive scratching/strumming here. Cool weaving of melodic figures, scales, and strums. Keeping the whistling in the back of the mix for now. He's just a master of texture, that might be the best way to put it. Has he scored a film yet? Also, who plays on this? Just him or a band? I'm curious. I always thought the "don't look back" part of this myth would be a lot of pressure! Now the vocals seems a little buried. I'm sure it's for a reason, maybe related to the myth. It's these moments where you just enjoy listening, though. Thinking can come later. Definitely a tough album to grasp just hearing once I'm feeling.

I like this early part, guitar or bass, not sure. It does have a ocean / wave feel musically, just as the words go. He probably does this a lot, makes sounds to mimic words and themes. Would be a good project or deep review angle. "Who is the night sky's lullaby" – interesting question. Wow, this 75 and 9 hypothetical, where he'd visit the old folks home with cookies is just stunning. Beautiful imagery here. Very fascinating concept going on. Pretty poignant in its simplicity. This break around the 3:00 mark or a little later is power. "What if we hadn't met?" This is really affecting and gorgeous.

Following that with more spareness. And questions! Different vibe though. Looser for one thing. It's almost a classic rock jam waiting to happen with that beat, but that's not in his character. Although it is picking up a little urgency maybe. No, ebbing back with a "la-la" passage. This whistling fills in for a blues solo sort of. Almost getting a slight whiff of "Knocking on Heaven's Door." Probably because it rhymes with shore. It would be wrong to call Andrew Bird unpolished, but this song doesn't quite seem to find itself.

13. Hole in the Ocean Floor

There does seem to be a lot of water / sea imagery here and the past few songs. Could be in for a slow build here, it says the song is 8+ minutes. That's fine, I like this picking & ambience combo. Mandolin? Very rhythmic playing. At first seemed like one instrument, but it's got to be two. Now a violin is coming in. 2:30 before the first real words. "A hole in the ocean floor" makes me think of a big drain – and being afraid of going down drains as a child. "All god's creatures" makes me think of Noah's Ark. The rest of the song doesn't evoke it though. It's enjoyable, definitely languid on the violins, just stretching out long notes. It could be environmentally conscious, it sounds sad about the hole. Kind of drifts off. Sort of a dreamlike song really.

Sounds like crickets. Actual bells being used, good title then. This has a nice nighttime feel to it. Things are winding down. People ending their days, returning home. Candles being lit, or lamps. For some reason I see bats across the moonlight sky. Animals are also resting. Feels like everything is unified or universal. Connected in life. Quite lovely, a nice way to bring the album to a close and clearly a perfect title with the dual meanings. It's almost experimental for him without the other instruments or his voice. I like this very much.

This album definitely was a tough one for the instant review, it really screams "replay me". I give it 3.5 stars out of 5, but I do believe this has a lot of potential as a grower or one to immerse in and spend time with. My favorite song in the moment was probably Sifters (11). You can purchase the album at Amazon or on iTunes.

Voting for the 3/13 release has closed, look for Delta Spirit coming up next.