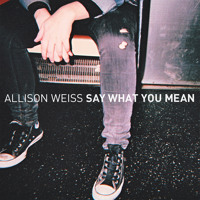 Over the past few months, I kept receiving emails about the new album Say What You Mean by Allison Weiss and the various songs being released. Single after single, they just kept coming, and I kept putting off a post so that I could include them all. The album came out 4/16 and I still haven't shared anything, which is really a shame because it's quite awesome. So check it out today if you haven't already.

The album starts with "Making It Up," and it's a great way to kick things off. You can tell right away that Allison is a talented writer. The melodies here and on the subsequent nine tracks will get stuck in your head, I can pretty much guarantee it. The lyrics you will find yourself humming or singing are very good, too. They are heartfelt and honest and I can also guarantee that there will be multiple instances where you can make a personal connection to them. Here, it's the question of whether the deep connection of a relationship was ever even real based on a current disconnect. And how, if you can't get that person to remember or admit the love, then you'd rather they just tell you it was all in your head so you can move on. Oof. It's painful but it's also brave to bear yourself that way to try to either get it back or get closure.

The music melds a strong pop sensibility with garage/punk energy. Because of the sound, it reminds me of some of the music I loved in middle school and early high school, which is probably best described as pop punk, and I think that's what I like best about it. I don't want that to sound insulting or make this album seem juvenile, which is simply not true for a few reasons. First, I still like that music for what it means to me and what it does, even if it's not what I tend to go for as often these days. Second, I think it's important to have music like this when you are young, though this still is a mature record. It really demonstrates a gift on the part of Allison in its blend of what to me feels more youthful because of my personal musical history with what I can understand and relate to as someone in my twenties figuring life out in an adult way. And of course there is more to it musically than just one genre.

Ok, so what do I mean by all that? The reason pop punk or even emo and now things like more confessional singer-songwriters get to me so powerfully is largely that feeling of emotional honesty. Whether or not it comes from a place of personal truth, I associate this kind of music with a deep sincerity. For an awkward teenager – and let's face it, I can still be pretty awkward – this was so important at that young age. It helps that it comes in such a listenable package. The dynamic music and the catchiness of Allison's vocals are easy entry points. Pretty quickly you'll hear the words and new worlds will open. Like "One Way Love." If 14 year old Steve was blasting this, which he surely would have if it existed then, he would have fallen into this song instantly. It's such a rush. And then he would have started to feel good about liking someone and wanting to share that. It would have been empowering.

The scary thing is I don't look back on my past and see much romantic success, so I don't know where I'd be without the sonic encouragement of countless hours spent listening to music to make just the most basic, marginal progress. That's why this record hits me now. I still need a bit of a boost when it comes to a lot of the emotional or interpersonal. I still have things inside that pain me and I still have fears. However, it would be wrong to say I'm still my 14 year-old self. It's that these kind of situations, issues, and challenges are always part of life. The complexity and depth comes from all the new associations we have. Back then, it was blank slate, it was "Oh, I can't wait to try this." Now there's some baggage. Some highs and lows, some experience. I bring way more to listening to Say What You Mean now and that's what's really cool about Allison's approach. It taps into these universal essences of life we can relate to at any age.

The one I thought about a lot for the "then & now" dichotomy was "Don't Go." There is something about that charge of the guitars and the pounding of the kick drum and the way the chorus makes a slight pause before the roar and the barrage of words, to name just a few things that really light up the part of my musical listening DNA that emerged for me years ago. The words describe something more complex and ambiguous that I don't think would have hit me nearly as hard as they do now. Before I knew much about life, it seemed like everything would always tend be good or bad. If I have learned anything at all, it has been that you rarely can separate the two for any meaningful event or person. A lot of new choices mean leaving things behind. A lot of interactions with people will bring you great joy and great pain, maybe simultaneously.

The other important thing about this sort of music is the whole "alone, together" aspect of growing up it directly channels. The times when you feel like you are completely on your own and can't relate to anyone around you, but also when you are trying to stand out as a unique individual. It's laughable to me now thinking of pop-punk being "alternative," since I got into it via most of the same channels as everyone else was getting their music: it still got played on the radio and MTV, it was all over magazine covers, and it sold millions of records. But it did feel a little less popular and I did try to springboard into other music from it, which not everyone does. Nevertheless, it's weird how something can make you feel both a part of something – the similar community of music fans who have the same deep connections to a forthright, energetic type of music that makes it easy to bond around – and bolster your own self-identity. "I Was An Island" puts more of a romantic spin on this, but it still hits on this more general approach of wanting to be part of something bigger and wanting to know yourself.

I could easily have put every track in here but I'll stop and say it's just a really good record. I think it will appeal to a pretty wide range of music listeners, which is exciting. The band is very tight and the sound is perfectly crafted while still feeling emotionally true. The lyrics are provocative, interesting, beautiful, and delivered to us through indelible melodies. I focused on the more upbeat aspect, but a delicate, more sparse track like "Wait for Me" demonstrates Allison's range and points towards a broader range of influences.  She has made something worth listening to with Say What You Mean, and I hope you check it out. This is the place to go to find links for streaming and purchasing. Like her on Facebook here and follow on Twitter.