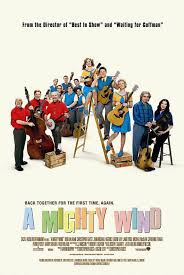 Tonight I'm posting the first installment in a series of three devoted to the music-based films of Christopher Guest: This Is Spinal Tap (1980s heavy metal), Waiting for Guffman (stage musical), and A Mighty Wind (1950s/1960s folk).They are some of my favorite movies and with music so funny and so well done, I thought they'd be great for further discussion as part of the Scenes & Songs feature. We'll kick things off with A Mighty Wind.

First, I have to say these are great films that you really ought to watch if you never have. They are in a style generally called "mockumentary," which takes on a documentary quality but is meant to have a humorous slant. It may seem all too prevalent now, but I really think Christopher Guest and company were pioneers of the format. The films feature similar casts of adept comic actors that fully inhabit a host of fascinating quirky characters, including some heavy hitters like Guest, Harry Shearer, Fred Willard, Eugene Levy, Catherine O'Hara, and Parker Posey. A few of them write all the music for the film and every actor legitimately performs their songs. Hilarious and musically talented, how can you not admire that? On a personal basis, numerous quotes from the films have become part of my lexicon and consistently crack me up. Seriously diggable stuff here, people.

A Mighty Wind is the most recent of the three (released in 2003). Because I had only watched it once I considered the least memorable. But when I rewatched it recently, I realized it was better than I remembered and also why it made less of an impression. I mostly think about these films from a comedy standpoint and I believe A Mighty Wind has less indelible laughs because it is the most honest homage to its subject matter. While the talent and craft of the other movies belies a sense of admiration to whatever is ostensibly being spoofed, A Mighty Wind really feels the most like a straight tribute. Sure, there are still plenty of humorous moments, but I think more come from non-musical supporting players like Bob Balaban's Jonathan Steinbloom and Fred Willard's Mike LaFontaine (Hey, wha' happened?!).

The plot centers on a television tribute concert for a recently deceased folk music producer and follows three acts. There's the Folksmen, most directly a parody of the Kingston Trio, and incidentally, made of the actors that also were Spinal Tap. (sidenote: there's a great story of how when Christopher Guest, Michael McKean and Harry Shearer would tour as Spinal Tap, they'd open for themselves as the Folksmen, often to raucous boos of unsuspecting audience members). Their quirks include a major interest in the Spanish Civil War and my favorite quote of theirs comes from when they discuss their past and present: "To do then now would be retro. To do then then was very now-tro."

The Folksmen's signature tune is "Old Joe's Place." It displays their great singing voices, which complement each other perfectly. I like the mandolin solo and the rapid fire details of everything you can find at Old Joe's. It gets a little humorous as they keep building to excess (a nurse on duty?) but that's mostly lost in the catchiness of the tune and vividness of the imagery.

Next is the New Main Street Singers, which seems like a spoof of the big ensemble acts of the folk movement, and also the iterations such acts go through over time. The main players in this group include Parker Posey, Jane Lynch, and John Michael Higgins. Lynch and Higgins represent the goofy new age side of folk artists, with their WINC belief system – Witches in Nature's Colors, duh. The song I like most of theirs is "Potato's in the Paddy Wagon," which features excellent harmonies, rousing performances musically and lyrically, and a wacky story of spud-like girl who ends up with the Sheriff. Again, it takes a couple listens to even discern the humor because the song is really good.

Finally, there is Mitch and Mickey, the classic male-female duo of guitar, autoharp and beautiful vocals. The main joke here is Mitch as the tortured poetic genius archetype, one who may have burned too brightly for a competent modern performance. This character has some amazing lines such as, "I think Crabbeville in autumn would look quite magnificent," and "35 years ago, preparing for a concert meant playing 'find the cobra' with the chambermaid," but all of this comes in a non-musical context. That's because their music is really done straight-up. Their hit is "A Kiss at the End of the Rainbow" and it is a legitimately gorgeous song. Eugene Levy and Catherine O'Hara sound good and really sell the moment on screen too. It just blows me away.  Like a mighty wind would, perhaps…and there it goes, I've ruined the moment.

Anyways, A Mighty Wind really comes across as the most heartfelt tribute to its source material of the three Christopher Guest films. There are more laughs than I realized, but few come from the songs themselves. I can listen to these fictitious songs with as much appreciation as I would have for real bands and I do think my enjoyment of this film (which was pretty high, but not Spinal Tap or Guffman high) will only grow with more viewings. I leave with you the titular song, performed by all three acts together and a few questions.

For those who are fans of this genre, do you find Guest and company did right by folk? Is there more humor than I realize or do you find it's just more good than funny? For fans of the movie, what are your favorite lines and moments of the film?

Be sure to come back soon for part 2! Oh, I can't resist. Here's Fred Willard doing his thing.